Foreign Meddling Ahead of Malaysia’s Elections

Posted on February 19, 2013 by landdestroyer
Xenophon: The Not-so Impartial Observer 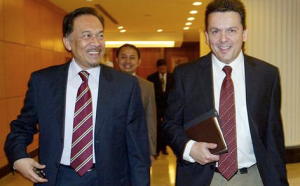 February 20, 2013 (Nile Bowie) – Malaysia’s decision to detain and deport Australian Senator Nick Xenophon has become a hot topic of discussion across the nation’s blogosphere. Xenophon came to Kuala Lumpur as part of a seven-member international team of election observers invited by de-facto opposition leader Anwar Ibrahim. Xenophon attended the Bersih 3.0 street rally during a previous visit to Malaysia and criticised the government for being “authoritarian” in handling the demonstrators. Xenophon was barred from entering Malaysia under the Immigration Act 8(3), and the state’s official statement claimed that Xenophon was deported as “a result of his participation in an illegal street protest in Kuala Lumpur last year,” referring to clauses in the Peaceful Assembly Act which prohibits non-citizens from participating in unauthorised public gatherings.

Local analysts have criticized Anwar Ibrahim, Malaysia’s de-facto opposition leader, for his alleged history of appealing to foreigners to legitimize his positions. From the hardline Muslim Brotherhood-affiliated theologian, Yusuf ‘Abdullah al-Qaradawi, known for controversially inciting sectarian divisions throughout the Muslim world, to the likes of Al Gore and Paul Wolfowitz – Anwar is widely credited in the Malaysian press with harnessing foreign influence to bolster his own political talking points. Ibrahim previously called on the Australian government to monitor Malaysia’s upcoming general elections, although Australia’s Foreign Minister Bob Carr declined to send observers, stating that Australia had no intention of influencing Malaysia’s elections.

Australian responses to Xenophon’s expulsion have varied; Peter Hartcher of the Sydney Morning Herald scolded Malaysia for lacking a “mature democracy,” stating, “The reason [for Xenophon’s deportation] is that he is an international observer campaigning in favor of a free and fair election. This is not a threat to Malaysia’s national security, but it is a threat to the ruling party’s grip on power.” On the other end of the spectrum is senior commentator Greg Sheridan, who questioned Xenophon’s partiality, stating that he is “campaigning for just one side of Malaysian politics – the opposition. He might reflect on the fact that the side he supports contains, as perhaps its strongest element, the most extreme Islamist party in mainstream Southeast Asian politics [PAS].”

A vocal minority within Malaysia feels that Xenophon’s deportation was an abuse of power, but the fact is that had Xenophon intended to observe the elections, Malaysian law requires him to formerly submit an observer application to do so. The nation’s Electoral Commission has confirmed that they have not received any application from any international observer. Additionally, representatives of de-facto law minister Datuk Seri Mohamed Nazri Abdul Aziz confirmed that Xenophon was in fact not included in the bipartisan delegation set to meet government officials, as Xenophon had claimed in his statements to the Australian press. Xenophon’s status as an independent observer in foreign media should not be reported as fact; local analysts have acknowledged his long-standing support and affiliations with members of Malaysia’s opposition – such affiliations would negate the legitimacy of an election observer anywhere in the world.

In the hot-tempered run-up to Malaysia’s upcoming general elections, figures from all sides of the political spectrum have questioned the opposition’s links to foreign-funders in Washington, reinforcing popular suspicion against foreign figures like Xenophon. Anwar Ibrahim’s Parti Keadilan Rakyat has bore strong criticism for accepting funds and training from US Government-linked foundations such as the International Republican Institute (IRI), chaired by US Senator John McCain. Bangkok-based analyst Tony Cartaucci writes, “Senator Xenophon’s visit to Malaysia was not one of ‘monitoring,’ but of checking up on a group of clearly compromised, openly foreign-funded, subversive elements operating behind the guise of disingenuous principles – making the Malaysian government’s claims that Xenophon constitutes a security risk absolutely justified.” Bersih coalition leader Ambiga Sreenevasan also conceded that her organization accepts funds from US Government-linked foundations. Malaysian authorities are rightfully concerned that these recipients of foreign capital have based their programs around casting doubt on the nation’s Electoral Commission, and thus, the very legitimacy of the ruling party and the democratic process.

The Electoral Commission has provided consistent and sound refutations to the allegations of electoral discrepancies made against them by several US-funded NGOs. Malaysia’s parliamentary select committee agreed upon implementing recommended electoral reforms addressed by civil society groups and has since passed 18 amendments to the electoral roll. One could deduct that Xenophon’s participation in the Bersih street rally, and his concerns regarding issues pertaining to electoral reforms translate into an attempt to falsely downplay the validity of the Electoral Commission. The United Nations has confirmed that Malaysia is completely in-line with international norms and electoral standards, and commentator Greg Sheridan is quite right to state that Malaysia is “one of the most democratic and freewheeling nations in Southeast Asia. Its elections are certainly not perfect, but they are better than in most parts of the world. Indeed, its very openness allows people such as Xenophon to grandstand there.”

Opposition backers appear to be quick to dismiss the ruling party via social media, and eager to welcome rhetorical support from ambiguous foreign political personalities without hesitation or distinction. A notable segment of Malaysian society believes that opposition politicians have aligned themselves with civil society figures to deliberately distort political discourse and the legitimacy of the Malaysian authorities. Mr. Xenophon’s expulsion was an unfortunate incident, but as someone with a background in law, he should have adhered to the stipulations required within Malaysian law by applying to be a recognized observer if he sought to be one. A notable excerpt from Peter Hartcher’s opinion piece cites a conversation he had with Ibrahim, where the opposition leader states, ‘‘in a fair and free election, I am absolutely sure we will win.” Such a statement duly notes the rationale of Malaysia’s fiery-tongued opposition leader and reinforces the opinions of those who accuse the politician of only claiming the game is fair when he himself is the victor.

Nile Bowie is an independent political commentator and photographer based in Kuala Lumpur, Malaysia. He can be reached at nilebowie@gmail.com

Covering geopolitics from a Southeast Asia perspective.
View all posts by landdestroyer →
This entry was posted in Asia, malaysia. Bookmark the permalink.
%d bloggers like this: