Posted on December 28, 2011 by landdestroyer

Most in the civilized world are blissfully unaware that we are marching ineluctably towards an increasingly likely pre-emptive nuclear war. No, it’s not at all about Iran and Israel. It’s about the decision of Washington and the Pentagon to push Moscow up against the wall with what is euphemistically called Ballistic Missile Defense (BMD).

On November 23, a normally low-keyed Russian President Dmitry Medvedev told the world in clear terms that Russia was prepared to deploy its missiles on the border to the EU between Poland and Lithuania, and possibly in the south near Georgia and NATO member Turkey to counter the advanced construction process of the US ballistic missile defense shield: “The Russian Federation will deploy in the west and the south of the country modern weapons systems that could be used to destroy the European component of the US missile defense,” he announced on Russian television. “One of these steps could be the deployment of the Iskander missile systems in Kaliningrad.” Those would be theatre ballistic missile systems. The latest version of Iskander, the Iskander-K, whose details remain top secret, reportedly has a range up to 2000 km and carries cruise missiles and a target accuracy to 7 meters or less.

Medvedev declared he has ordered the Russian defense ministry to “immediately” put radar systems in Kaliningrad that warn of incoming missile attacks on a state of combat readiness. He called for extending the targeting range of Russia’s strategic nuclear missile forces and re-equipping Russia’s nuclear arsenal with new warheads capable of piercing the US/NATO defense shield due to become operational in six years, by 2018. Medvedev also threatened to pull Russia out of the New START missile reduction treaty if the United States moves as announced. 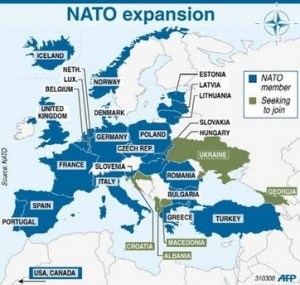 Image: NATO’s creeping encirclement of Russia. Engdahl concludes, “in any case the fact that Washington continues to tear up solemn international arms treaties and illegally proceed to install its global missile shield is basis enough for those in Moscow, Beijing or elsewhere to regard US promises, even treaties as not worth the paper they were written on.”

The Russian President didn’t mince words: “I have ordered the armed forces to develop measures to ensure, if necessary, that we can destroy the command and control systems” of the US shield, Medvedev said. “These measures are appropriate, effective and low-cost.” Russia has repeatedly warned that the US BMD global shield is designed to destabilize the nuclear balance and risks provoking a new arms race. The Russian President said that rather than take the Russian concerns seriously, Washington has instead been “accelerating” its BMD development.

Covering geopolitics from a Southeast Asia perspective.
View all posts by landdestroyer →
This entry was posted in Engdahl, Russia. Bookmark the permalink.
%d bloggers like this: