Posted on September 25, 2011 by landdestroyer

September 25, 2011 – Turkey brazenly claimed on Friday it had seized a Syrian ship allegedly carrying weapons, declaring that Turkey was merely enforcing an “arms embargo” on their neighbor for the “brutal crackdown on the country’s uprising,” reports TIME.

Turkey’s prime minister, Recep Tayyip Erdogan, has stated that Turkey was “coordinating its efforts” with Washington in its bid to have Syrian president Bashar Assad resign while enforcing contrived UN sanctions against the nation. Turkey’s Erdogan also stated that, “I have cut all contacts with the Syrian administration. We never wanted things to arrive at this point, but unfortunately, the Syrian administration has forced us to take such a decision.” 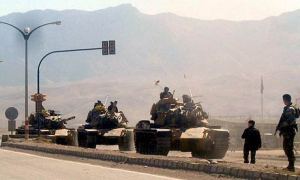 Photo: Turkish tanks entering Iraq to raid Kurdish towns and hunt suspected rebels in 2008. More recently, Turkey has been bombing “suspected” rebel bases in both Turkey and Iraq, as well as conducting mass nationwide arrests. Strangely, as Turkey verifiably does what Libya’s Qaddafi and Syria’s Assad have been accused of doing, the West’s myriad of disingenuous rights advocacy groups are deathly quiet as is the Wall Street/London beholden UN Security Council and the West’s corporate media editorials.

What TIME predictably omits is the fact that Turkey itself has been waging a decades-long bloody campaign against its own armed uprising in predominately Kurdish areas bordering Syria, Iraq, and Iran. In fact, at one point, the US allowed Turkish tanks to cross into American-occupied Iraq to attack villages suspected of harboring armed Kurdish separatists in 2008, mirroring the very tactics Erdogan is now condemning Syria for. The Guardian reported in their 2008 article, “Iraq demands Turkey withdraw from border conflict with Kurds,” that the conflict had been raging since 1984 and had cost the lives of 40,000 people.

More recently, as Turkey’s prime minister lectures neighboring Syria on its bid to crush foreign-funded, armed militants attempting to overthrow the Assad government, the Turkish government is preparing to augment its compliment of Israeli drones with a deployment of US Predator drones on its soil. The Associated Press reported in an article titled, “Turkey: US likely to deploy Predator drones,” that Turkey has been “pressing for the drones in an escalating war against Kurdish rebels.” Turkey, in addition to rolling tanks into towns suspected of harboring militants, and the deployment of drones, has also strafed suspected rebel stronghold with airstrikes and conducted sweeping nationwide mass arrests. In other words Turkey is doing everything Syria is doing, plus what Qaddafi in Libya was accused of doing, only fully sanctioned by the West, with arms supplied by the West, and under the muted coverage provided by the Western media.

George Soros’ Amnesty International (page 10) and Human Rights Watch along with the myriad of disingenuous rights advocate groups propped up by the US State Department via the National Endowment of Democracy, including Freedom House, Reporters Without Borders and International Federation for Human Rights (FIDH) are all hypocritically, though predictably quiet regarding Turkey’s actions. Turkey is thus far an obedient client state of Wall Street and London, and therefore is protected, perhaps even being extorted regarding its current struggle with Kurdish separatists.

In reality, all nations have the right to protect themselves from armed militant groups that seek to carve up their nation with violent separatist ambitions. This includes Syria, Libya, and Turkey, though Turkey’s penchant for unilaterally crossing borders in pursuit of militants is an egregious transgression against its neighbors’ sovereignty. Erdogan, despite being perpetually bent in prostration before his Western backers, must realize that at any given time his nation’s bloody and protracted campaign against the Kurds can (and will) be portrayed as a crime against humanity and the same pretenses used to invade Libya or levy sanctions against Syria can easily befall him. In many ways, this might explain why Erdogan has been so servile toward the West to begin with. 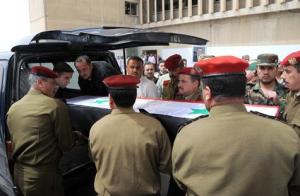 Photo: Syrian security forces bury their dead. According to Al Jazeera, Syria’s “unarmed peaceful protesters” have managed to kill over 700 members of Syria’s security forces and are now openly admitting they are armed or attempting to source arms. The fact that Syria’s opposition has been armed from the very beginning has been reported by the alternative media for months now.

Ironically, as Erdogan berates Syria for its “brutal crackdown,” Al Jazeera has recently laid to rest the fable that Syria’s protesters are “peaceful pro-democracy demonstrators” and has finally admitted they are indeed armed and have murdered over 700 members of Syria’s security forces, in a feature titled, “Syria: The revolution will be weaponised.” Despite admitting hundreds of Syria’s security forces have died in the months of fighting, Qatari government propagandists at Al Jazeera claim that only now are protesters thinking about arming themselves and that the heavy losses were the result of isolated, armed opposition groups. In reality, this is a replay of the Libyan operation, where US-backed and armed militants took up weapons on day one against Qaddafi’s government and were only admitted to be armed and lent additional weapons and protected by a no-fly zone when it became clear they could not take the country by themselves.

Likewise in Syria, the “revolution” is coming to an end as Syrian security forces appear to have broken the back of the armed uprising. The US, EU, and client states like Turkey are now attempting to increase pressure, and perhaps even initiate a “no-fly zone” under which NATO can mercilessly bomb Syria’s infrastructure and provide air support for a very much armed opposition.

That Syria’s Kurds have been participating in the uprising against Syria’s government further expands the irony regarding Turkey’s meddling. Reuters, earlier this month, reported that indeed the Kurds had given their full support to the Syrian uprising in an article titled, “Syria’s Kurds see better lot if Assad goes: activists.” The Jerusalem Post also reported that Kurdish “activists” living abroad convened in Europe to call on Syria’s Kurdish minority to join the uprising. The Kurds have been the historical proxy of choice for Western powers and their client states to destabilize and harass target nations throughout the Middle East with a certain degree of “plausible deniability.”

The Brookings Institution, a Fortune 500 Wall Street/London-funded think tank that produces the vast majority of America’s foreign policy, in a report titled, “Which Path to Persia?” clearly spells out the use of US-backed Kurdish rebels to harass the Iranians.

On page 113 (126 of the .pdf) the report explicitly lists the Kurds as one of many opposition groups under consideration by the US for covert support in rising up against Iran:

“Consequently, some who favor fomenting regime change in Iran argue that it is utopian to hold out hope for a velvet revolution; instead, they contend that the United States should turn to Iranian opposition groups that already exist, that already have demonstrated a desire to fight the regime, and who appear willing to accept U.S. assistance. The hope behind this course of action is that these various opposition groups could transform themselves into more potent movements that might be able to overturn the regime.

For instance, the United states could opt to work primarily with various unhappy Iranian ethnic groups (Kurds, Baluch, Arabs, and so on) who have fought the regime at various periods since the revolution.” [emphasis added]

The report also nostalgically reflects on the US’ use of Kurds to harass neighboring Iraq. It is safe to conclude that these same Kurds who straddle the borders of Syria and Turkey are also being backed by covert networks of Western intelligence agencies applying pressure to both Assad and Erdogan. Surely, even if Syria and Turkey were not primary targets of the West’s agenda, though clearly Syria at the very least is, resources pumped into armed Kurdish groups by the CIA to harass the Iranian government can and do make their way toward Turkish and Syrian targets.

Erdogan’s interest in self-preservation and his inability to understand why his nation is temporarily permitted to butcher Kurdish separatists and Turkey’s neighbors are not, will eventually cost Turkey its southeastern provinces. Should Syria or Iran, or both fall, the Kurds will be given even more breathing space and peace of mind to concentrate on Turkey. When the time comes, Turkey, just as Iraq and Libya, will be betrayed by the West, destabilized, carved up, and handed over to ineffectual infighting local regents whom the West will lord over perpetually – as per the classic imperial stratagem of divide and conquer. That is unless Turkey believes it will eventually be welcomed into the bankrupt, collapsing, mismanaged, disgracefully interdependent European Union and graciously allowed to share in their collective misery and misfortune at the hands of the West’s parasitic banking houses.

Covering geopolitics from a Southeast Asia perspective.
View all posts by landdestroyer →
This entry was posted in Uncategorized. Bookmark the permalink.
%d bloggers like this: