Posted on April 2, 2011 by landdestroyer

The Same Terrorists who Killed US, NATO Troops in Iraq

Washington DC, March 24, 2011 — The current military attack on Libya has been motivated by UN Security Council resolution 1973 with the need to protect civilians. Statements by President Obama, British Prime Minister Cameron, French President Sarkozy, and other leaders have stressed the humanitarian nature of the intervention, which is said to aim at preventing a massacre of pro-democracy forces and human rights advocates by the Qaddafi regime.

But at the same time, many commentators have voiced anxiety because of the mystery which surrounds the anti-Qaddafi transitional government which emerged at the beginning of March in the city of Benghazi, located in the Cyrenaica district of north-eastern Libya. This government has already been recognized by France and Portugal as the sole legitimate representative of the Libyan people. The rebel council seems to be composed of just over 30 delegates, many of whom are enveloped in obscurity. In addition, the names of more than a dozen members of the rebel council are being kept secret, allegedly to protect them from the vengeance of Qaddafi. But there may be other reasons for the anonymity of these figures. Despite much uncertainty, the United Nations and its several key NATO countries, including the United States, have rushed forward to assist the armed forces of this rebel regime with air strikes, leading to the loss of one or two coalition aircraft and the prospect of heavier losses to come, especially if there should be an invasion. It is high time that American and European publics learned something more about this rebel regime which is supposed to represent a democratic and humanitarian alternative to Gaddafi.

Since many of the rebel leaders are so difficult to research from afar, and since a sociological profile of the rebels cannot be done on the ground in the midst of warfare, perhaps the typical methods of social history can be called on for help. Is there a way for us to gain deeper insight into the climate of opinion which prevails in such northeastern Libyan cities as Benghazi, Tobruk, and Darnah, the main population centers of the rebellion? 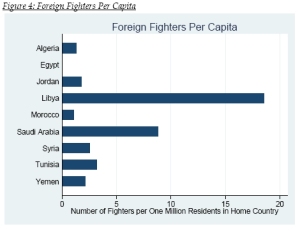 It turns out that there is, in the form of a December 2007 West Point study examining the background of foreign guerrilla fighters — jihadis or mujahedin, including suicide bombers — crossing the Syrian border into Iraq during the 2006-2007 timeframe, under the auspices of the international terrorist organization Al Qaeda. This study is based on a mass of about 600 Al Qaeda personnel files which were captured by US forces in the fall of 2007, and analyzed at West Point using a methodology which we will discuss after having presented the main findings. The resulting study1 permits us to make important findings about the mentality and belief structures of the northeastern Libyan population that is furnishing the basis for the rebellion, permitting important conclusions about the political nature of the anti-Qaddafi revolt in these areas.

Read the rest of Dr. Tarpley’s article at Tarpley.net

Covering geopolitics from a Southeast Asia perspective.
View all posts by landdestroyer →
This entry was posted in Libya, middle east, tarpley. Bookmark the permalink.
%d bloggers like this: